The year 2022 has seen a rise in design activism responding to the war in Ukraine. Such is the story of O–PLICH–®: a small collective of creatives of Ukrainian origin designed a drop of hand-printed t-shirts, sold them via an online shop made with Readymag and donated the money to support their country. The O–PLICH–® shop is one of the projects that won Readymag Website of The Year 2022.

Below, O–PLICH–® co-founders Alisa, Vlad and Illia tell the story behind the project and its website.

“The beginning of the war in Ukraine ground all of my personal creative projects to a halt: I just felt emotionally drained,” says Vlad. So was his friend Alisa, a native of Kyiv who’d recently completed her degree in Communication and Media. She was the one who first got the idea of joining their creative forces to help Ukraine. In March 2022, Alisa messaged Illia, who supported the idea and gathered the initial team: most of them his design university friends—designers, photographers and illustrators. Soon, the team crystallized and united a total of ten people.

“What united us was the mutual desire to do something to help our country. We decided to start with a drop of some physical things we could sell to raise money. The first months of O–PLICH–® were an iterative process of developing our own identity through discussions and brainstorming”, says Illia.

“Eventually we came up with a name that is short for plich-o-plich: ‘shoulder to shoulder’ in Ukrainian. The concept behind plich-o-plich is mutual support and togetherness that characterizes our nation and our community in particular,” adds Alisa. She took the role of a project manager and business developer, caring for the overall progress and communications.

Subsequently, the collective landed on the idea of releasing a drop of T-shirts with custom prints, mainly, because a T-shirt is something people can easily relate to. “When you buy a T-shirt and wear it, you’re obviously stating that you support the philosophy and idea behind it. When you’re contributing to the fundraising cause, people feel related to it,” explains Illia— photographer and designer who took the role of creative director.

“Proceeding to the visual concept of the first drop, we decided to come up with a narrative that would melt bits of contemporary and traditional Ukrainian culture into one and translate it into a European context. Also, we decided that the print would include small pieces of work from each team member,” says Vlad, who took the role of brand designer.

The name of the drop is ‘POBUT’—Ukrainian word for daily life. Each team member was invited to come up with a small visual piece, either a photograph, collage, illustration or typographical composition that represents the traditional Ukrainian way of living and has special meaning for them. The final print combines personal visual elements with more abstract ideas: traditional Ukrainian kitchenware, a wooden chair, a seagull from Odesa, legendary Ukrainian boxing champions Volodymyr and Vitalii Klitschko and more. “We organized these pieces into one layout: it made up the visual for the T-shirt print—a capsule of Ukrainian ancient and modern culture. The ‘POBUT’ drop is a tool for promoting it,” Illia adds.

Getting a voice in the web

“First, we wanted to create a simple online shop, but then we saw that Readymag gives free subscriptions to Ukrainians and decided to pick it. Earlier, we have briefly explored the tool, and it seemed convenient and fluent. The fact that it gives easy options to connect to marketplaces convinced us that it is the right choice,” says Vlad.

“Seeing how much freedom and space for self-expression Readymag gives, we thought it would be interesting to make the online shop somehow interactive and a bit experimental, telling about the project along the way. The whole design process was very intuitive and spontaneous: by the time we’d started creating the online shop, we’d been living with the idea for a while, which was enough to create the vibe and the general visual narrative,” he adds. The layout of the O–PLICH–® shop is split into two equal columns: the first presents the main information about the project and the second one gives information related to making a purchase. Currently, the ‘POBUT’ drop is sold out, but a new one is underway.

In the summer of 2022, the design team gathered in Barcelona to screen-print the T-shirts. The first 100-T-shirt collection sold out in 10 days, after which the most popular item was restocked into 20 more pieces that sold out as well.

“We hand-printed the graphics ourselves: it was important to us to create a physical product into which we put our own skills and time. This way, it would have more energy and physical value—both to us, and to the people who would buy our product,” explains Illia.

Besides the drop, O–PLICH–® won a chance to throw a techno fundraiser at Cultuurpodium Perron club (Rotterdam, the Netherlands) and sold more than 430 tickets. Their techno-music event featured four DJs that came together to play for the support of Ukraine. Its poster developed for the rave was featured in the INTL international poster book and Typosters.

Go to Readymag Examples
Want even more stories from us? Sign up for our biweekly newsletter

Meet the hand-picked recap of the most inspiring, knowledgeful and practical articles we released in 2022. 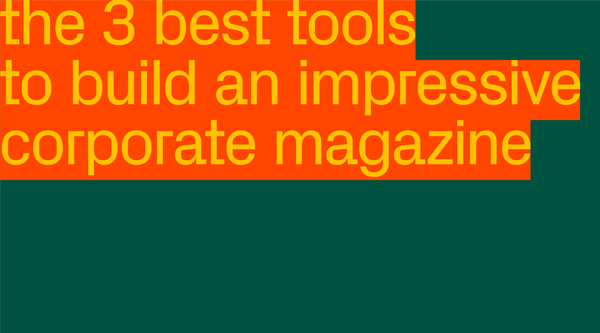 In this article, we’ll consider 3 of the best tools you can use to design and build an impressive corporate magazine.